What is Ammonium Sulfate? 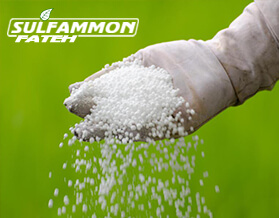 What is Ammonium Sulfate

What is Ammonium Sulfate?

Ammonium Sulfate is one of the most consuming and efficient fertilizers in agriculture industry which is consumed for the cases that need nitrogen and Sulphur.

Nitrogen is among the most important components which lead to plants’ desirable performance in agriculture industry. Nitrogen is the most abundant element on earth and the most consuming element in plants which is absorbed as nitrate, ammonium, and urea ions through roots and is one of the compounds which lead to protein production in plants.

Nitrogen consists of important organic components in plants such as chlorophyll and stimulates the vegetative growing of plants as a nutrient component.

SULFAMMON is mainly used for the cases in which nitrogen and sulfur are needed as soil supplement and also as the nutrient components for growing plants. Although there are other fertilizers which include more than 21% nitrogen, but the nitrogen in SULFAMMON is much less wasted and washed compared to other nitrogen fertilizers and Also SULFAMMON is a great source of sulfur for the plants protein production.